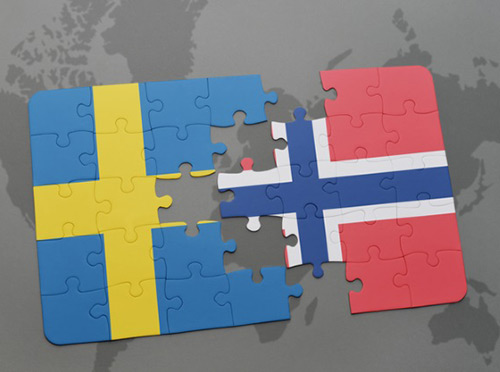 Today, ShortSelling will bring up the fight betweee Norway's krone and Swedish krona. This currency pair is advancing last several weeks, but the risk of decline is still not over. Norway's krone is advancing mostly to higher oil and housing prices and more market optimism. The situation around Covid-19 in Norway keeps improving, as vaccination speeds up while the number of new cases decreases. After a peak of almost 1000 contagions per day, the number of daily new cases averaged 270 last week. The Norwegian krone has been known as a safe heaven currency, thanks in large part to Norway having no net debt. This currency is regulated by the Norges Bank, the country's central bank, and the Norwegian krone value is affected by changes in interest rates and oil prices. So it's worth to look into our analysis about the oil sector as well.

Norway is one of Western Europe's leading oil exporters, and because of this, changes in the price of crude oil influence NOK. Sweden's currency gained ground against all its major rivals last year as Riksbank held firm in 2020 compared to many other major central banks. The Riksbank has lots of measures to support the Swedish economy in this pandemic environment, and it continues to help to facilitate access to credit and liquidity. It is also important to say that Sweden had a unique approach to the covid pandemic fight, which helped the country to avoid the worst of the labor market disruption seen in other developed economies. Sweden registered 3,388 new coronavirus cases last Friday, and the country registered 87 new deaths, taking the total to 12,115. Sweden's death rate per capita is several times higher than that of its Nordic neighbors but lower than several European countries that opted for lockdowns.

The NOK/SEK is advancing last several weeks, mostly due to an increase in oil price, but the risk of another decline is not over yet. The main trend of this currency pair remains bearish, and there's a high probability that the SEK's strength and NOK's weakness will come back again. One of the easiest ways to buy or short NOK/SEK is through a margin trading platform. Many brokers allow this type of trading, with margin trades allowing investors to “borrow” money from a broker to make a trade. It's important to remember that there may be a leverage factor, which could either increase your profits or your losses. It's not a good idea to hold a short position for long periods or to leave an open position with no stop-loss order.

The global political tensions also have a big influence on this pair, and the pair needs to jump above the 0.9900 level to extend moves higher. I marked support and resistance levels – 0.9900 and 1.0000 represent the current resistance level; 0.9700 and 0.9600 are the current support levels on this chart. If the price jumps above 0.9900, it would probably reach the 0.9950 level very soon; the next target could be located around 1.0000. If the price falls below 0.9700, that could be a very good opportunity for the short- term traders; short-term traders can put the stop loss at 0.9720 and take profit at 0.9660 or below.

The NOK/SEK is advancing last several weeks, mostly due to an increase in oil price, but the risk of another decline is not over yet. Norway is a leading oil exporter in Western Europe, and because of this, changes in the price of crude oil influence NOK. The Norwegian krone has been known as a safe currency, thanks in large part to Norway having no net debt. It is also important to mention that the situation around Covid-19 in Norway keeps improving, as vaccination speeds up while the number of new cases decreases. The risk factor for the Swedish krona is the fact that Per Jansson, a member of the Riksbank, has also discussed the negative interest rates. He is opening up for negative interest rates again if in case he manages to get more on his side, the krona might decrease in value drastically against the NOK.