The technical indicator Bolling Bands are signalling a strong short term sell (2-6 weeks) for the American pioneer in plant-based meat substitutes. After going up over 17% on Tuesday, it’s clear that some shorting or at least sell off would come from investors keen to take home some profit. It’s been a tremendous run for Beyond Meat that last few years, and nobody would be surprised if their shares fell to below 100 again considering the high valuation.

The average suggested price by Bollinger Bands would be around $95 in the coming months. Today, the price has been around $117-118 the last few hours, which means a drop of over $27 would lead to a huge profit for any trader having a bit of luck with their short selling efforts. Even a slightly smaller drop that going in the suggested direction of Bolling Bands would likely create a fair profit.

Would you short a ethical company such as Beyond Meat?

In case you are vegetarian or just a big fan of Beyond Meet like we are, would you still consider shorting a company that won Peta’s company of the year already in 2013? Well, there is another way to see it and do it! 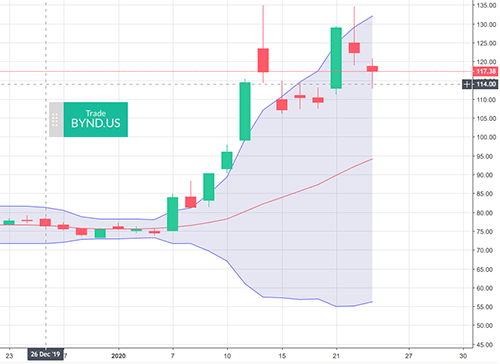 We suggest going short with CFD’s instead of actually finding someone to lend their shares to you. This way, the shorting will not be in the actual market and you will not “vote down” the share. Short selling by CFD’s are just another way of earning a small or decent profit, without taking all too big risk. You set the levels yourself. You can go short with €1000 on Beyond Meat with contract for difference. Or spend €500 or €5000, whatever you find realistic. But at least the heavily relied upon technical indicator Bollinger Bands suggests there might be good opportunities in the short run.

Where can Beyond Meat be shorted?

It depends if you prefer to do the “old style” shorting, where you call up a broker and ask them to find someone willing to borrow their shares to you or if you rather do the new type of short selling where you do it with CFD’s. For the old fashioned way, you can call any broker of your choice, but are unlikely to find a quick and simple match. Also, the downside can be unlimited if the shares goes in the wrong direction when you borrow shares and both pay a fee for borrowing and .

Instead, we suggest using CFD’s for short selling, which is a simple, quick and fair way to get going immediately. Our favourite broker is Skilling, that is created by Scandinavian tech and investment specialists. Their platform is easy to get started with and you can make a demo account first in order to experience how short selling works. Alternatively, you can start with a real money account and both buy and sell shares and a couple of other instruments. If you are looking for a British based short selling broker, we could recommend Plus500 that’s been around for quite a while and have more stocks to trade and go short in than anyone else that works with CFD’s. How does short selling on Skilling work?

Below you see a screenshot of how it looks like when doing short selling at Skilling for Beyond Meat. You can simply select BUY or SELL. Since you like to sell (go short), it’s simply to select the sell button. Select the amount and they give you all the details for the trade.

Note: This is not any financial advice. We simply discuss the technical indicator Bollinger Bands and what their data suggest right now. In order to make any trade with Beyond Meat, we recommend that you talk with a financial advisor first.