Registered at the short selling broker Pepperstone, 5 minutes ago.

Uber is a global ride-hailing company with over 700 cities covered, mainly in the US, UK and Europe.

Data updated continously for UBER, showing up to the 500 most recent 100 data points

Uber shares went live on the stock market since beginning of May 2019. Short Selling are worries about the current valuation if the ride sharing numbers goes down significantly in 2020. However, there are still many countries where Uber are still not available and might have a great upside.- Uber didn't manage to merge with Grubhub due to an antitrust investigation. Sometimes, “big” can be a problem.

– The quarterly reports for Uber will be watched closely by analysts, since ride-sharing gone down drastically in many countries around the world and many even changed their behaviour following Covid-19. Today, many are rather driving their own car, walking, cycling or taking motorbike to get around due to the increased infection risks Uber drivers been having.

– Might be forced to treat drivers as employees instead of independent contractors, which could add extra costs to the business, while making it less flexible.

– Uber's surge pricing during busy times made many customers either stop using it, since normal taxi is cheaper in many countries, or start to get very negative towards Uber.

– Sexual harassment from Uber drivers created #deleteuber campaign and many female passengers got worried to ride with the company.

– Self-driving cars could both be an opportunity and high risk for Uber, according to the company themselves.

– Pick-ups and drop-offs at airports are getting harder and costlier, making some customers opting for other transport modes.+ Still not available in many countries with monopoly.

– Several Uber executives are selling shares in the company.

– Do UBER still own Uber Eats? Yes, they do, except in some countries such as India sold the local, Indian Uber Eats to Zomato a privately hold company. Uber Technologies Inc received a 9.9% stake in Zomato when they sold the Indian Uber Eats in January 2020.

– Uber rides cannot go in taxi lanes in most countries, which add extra time to your journey when there is traffic, compared to going with a real taxi driver.

– Many competing apps such as Gett in the UK, Israel and Russia are usually quicker (since allowed in taxi lanes).

– Lots of alternative app based ride sharing sites are cheaper, such as Didi in China and Mexico, Ola Cabs in India and Kapten in Portugal and France are way cheaper.

+ Still don't have many of the top-end restaurants on Uber eat.

+ Lots of potential for Uber bicycles in more cities.

+ Uber Chopper can also roll out in many more locations with time, including London, Stockholm and Barcelona.

+ Cashless rides are simple and convenient. You never give any cash to the drivers. Just order from the app.

+ The app might be the biggest assets of the company, apart from the memorable name.

Below you can find the most recent news posts about Uber Technologies Inc, primarily from US and UK based news sources. Monday, 8 August 2022, 17:11:08
SoftBank”s Masa Son Reports Record Loss In “Depressing” Press Conference, Admits “Shame” At Being “Elated” By Bubbles Back in 2019, around the time it was creating laughable charts such as this one… …. and this… … we asked if Japan”s SoftBank was the Bubble era”s ” short of the century ” (and if, by extension, Masa Son was this generation”s biggest financial charlatan). Well, three years later, and one remarkable “bubble -bust” cycle later which has seen the stock go nowhere in three years despite having 16 buy ratings, 3 holds and 0 sells … … that question is as pressing as ever, after this morning SoftBank posted a record loss for the second straight quarter as market turmoil further spread across its portfolio of technology stocks . In an unusually downbeat press conference, which even the world”s most overhyped investor, Masayoshi Son, described as “depressing”, the SoftBank CEO admitted that his famously aggressive global investment strategy should have been more selective, and said he was “ashamed of myself for being so elated by big profits in the past” – which of course is a euphemism for ”bubbles”, since none of SoftBank”s stocks are actually, you know, profitable – and said he will will undertake “significant cost reductions” at the Vision Fund including layoffs.
— Zero Hedge Monday, 8 August 2022, 15:16:05
Uber Technologies (UBER) has expanded its on-demand delivery partnership with cosmetics firm The Body Shop.Starting August 10, 2022, 75 of The Body Shop stores will be available for…
— Seeking Alpha

Monday, 8 August 2022, 15:14:29
SoftBank said it sold its remaining stake Uber as the Japanese conglomerate looks to raise cash amid mounting losses at its investment unit.
— CNBC Monday, 8 August 2022, 15:00:00
75 stores will be available for same day delivery through Uber Eats SAN FRANCISCO, Aug. 8, 2022 /PRNewswire/ — Today, Uber Technologies, Inc. (NYSE: UBER) and The Body Shop announced the expansion of their partnership to include almost all of the beauty company”s retail stores across the…
— PR Newswire

Rating: 9.57/10
Minimum deposit: €250 by bank
Description: Capital.com offer a large number of stocks for trading. Register an account today and check if they have UBER available or trade one of the many other CFD stocks they have.
Risk warning: 67.7% of retail investor accounts lose money when trading CFDs with Capital.
Trade Uber Technologies Inc at Capital ›››› Read our review of Capital›› Go to the Capital homepage

AvaTrade
Trade Uber Technologies Inc at AvaTrade We have confirmed that the instrument #UBER is available from NYSE with this broker. With a spread of 0.18% and 5:1 retail leverage.
›› TRADE uber NOW
›› AVATRADE review

Skilling
Trade Uber Inc CFD at Skilling ››We have confirmed that the instrument UBER.US is available with this broker.
›› TRADE uber NOW
›› SKILLING review

Capital
Trade Uber Technologies Inc at Capital ››We have confirmed that the instrument UBER is available with this broker.
›› TRADE uber NOW
›› CAPITAL review
Trade other stocks

Uber Lose UK Court Case, Rest of EU next?
Friday, 19 February 2021 21:52
Uber shares dropped 1.2% after loosing the legal battle over the way it treat workers. Taxi drivers are are not freelancers in Europe, says Jitse Groen on Twitter. Spanish and Dutch courts might follow soon and Uber is likely to loose the gig economy in Europe, he continues. UK is one of the most important markets for Uber in Europe, with over 100 000 drivers. Short Selling estimate that Uber will be hit by huge costs related to hiring working instead of having them as free lancers. With a souring economy and most of the people working from home, Uber already took a huge hit in London. Michell Hobs, employment law specialist from Stevens & Bolton conclude that this landmark ruling revs up the pressure on gig-economy businesses. Uber might be the first of many to have a problem when it comes to employment
UBER

Uber Technologies shares dip because of the pandemic
Saturday, 17 October 2020 00:57
Uber is one of the companies that has experienced its worst time during the pandemic. The main reason why Uber has suffered during the epidemic is that more people prefer to either drive themselves or stay home following the regulations provided by the WHO. However, the company is working hard to rise from the crisis. For instance, Uber Technologies recently launched a medicine delivery service in South Africa. However, much the company is trying to turn a profit; the challenges are still overwhelming. By the end of last month, the company reported a loss of 2.24 billion dollars in revenue. The company announced a shutdown of their ride-share app Lyft after legal issues that required Uber to classify their drivers as full-time employees. Many at ShortSelling.com are still surprised about the positive ratings among analysts about Uber shares, that likely would have quite some downside and not just upside as most analysts seems to believe
UBER

California sees Uber drivers as employees. Who's next?
Tuesday, 16 June 2020 21:28
Calling your employees contractors are not going to work forever right? Uber are loosing their first fight in California over GIG worker laws, writes Nolo. All Uber drivers working will be considered employees according to the new AB5 law, Reuters report. Earlier attempts by Uber to change their app to avoid California's laws failed. This means a lot of extra costs for Uber and their around 90 000 drivers in California. If expecting $1500 in extra costs for each driver, Uber might loose up to 135 millions in revenue in California alone during one year. If this spread to more states and European & Asian countries, the issue could be huge for Uber. Looking to take advantage of the recent Uber rules? Go either long or short with Skilling through CFD's today!
UBER

Uber loose the Gruphub deal: Shares down again
Thursday, 11 June 2020 11:47
Instead of Uber, it seems like Grubhub rather merge with Just Eat instead, CNBC reports. The main reasons for the ended merger between Uber and Grubhub seems to be an antitrust investigation. Uber shares fell almost 5% yesterday and the company is down 3.8% in pre-market trading. The short selling volume in Uber shares been going up lately, reaching 12% before the market opens on Thursday. Looking to buy or sell Uber? Read the review of Skilling, one of our favourite brokers for both shorting and buying Uber shares with CFDs. For Uber, it seems to be...
Read the full newsflash
UBER

Uber executive and co-founder sell shares for $78.5M
Friday, 29 May 2020 16:26
Days after recent Uber layoffs, two prominent executives of the firm sold off major share holdings. The executive woman sold half of holdings in Uber shares for $8.6M. Meanwhile, the co-founder Garrett Camp has sold off since march, 2020 for a total of $69.6. Uber share price rose 2.5% in early trading...
Read the full newsflash
UBER

Uber layoffs reach 6700 employees
Tuesday, 19 May 2020 15:21
Uber today announce they are laying off another 3000 employees today, in addition to 3700 the 3rd of May, 2020. That makes Ubers total lay offs reaching 6700 workers just in May. Uber's redundancies will mainly happen for customer service staff and the recruitment teams. 40 of their worldwide offices are also going to...
Read the full newsflash
UBER 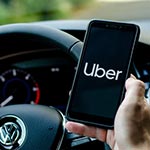 Uber Approaches Grubhub with a Takeover Offer
Tuesday, 12 May 2020 18:49
Uber Technologies shares rose following their latest acquisition plans. Uberis a globally extensive company that has transformed the meal delivery and ride-sharing markets. The demand for food delivery in the United States has grown with the current stay at home directives. Uber is looking forward to buying the online food delivery company, Grubhub to keep up with the high demand. The deal could give uber a boost since coronavirus has disrupted the company's core business of ferrying people from place to place. Deliberations are ongoing, and the talks could fall through. All depends on which deal Uber offer in the end, ShortSelling.com assume. Based on Grubhub's statement,...
Read the full newsflash
UBER

Do you have any questions about Uber Technologies, Inc.?
Do just like hundreds before you have.
Do not hesitate to get in touch with us via our livechat. We try to reply to your questions as soon as possible. But if we unable to help you, we are happy to send you an email with more details afterwards. 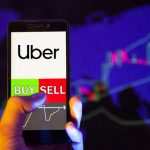 Time to go short in Uber Shares with CFDs?
2 year(s) ago
Latest news
We use cookies to ensure that we give you the best experience on our website. If you continue to use this site we will assume that you are happy with it.Ok